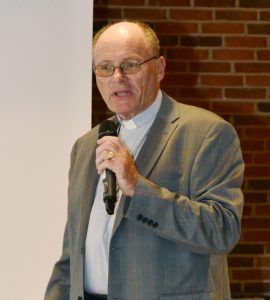 I do not need a microphone …

I speak loudly and clearly enough for everybody to hear me

By rev. Eyolf Berg, priest of the Nordic Catholic Church, secretary of IVSS Churchear
(Click for a German or a Norwegian version of this article)

The heading describes a well-known situation, and I am in many ways meeting myself at the door when I focus on this problem. For years I used to say exactly that, when I was offered microphones in churches or in parish houses. And I used to push fixed microphones as far away as possible, because I found them a nuisance. The Creator has equipped me with a voice probably louder than that of most others. I have also always been conscious of the need to speak distinctly and clearly. This means that many hard of hearing elderly people in nursing homes used to appreciate my visits to them, because I managed to break through their “sound wall” – or so I imagined.

It took a 7 year-old girl to make me understand how wrong I was, and how much I had deprived a great number of those to whom I had been preaching for some 20 years. She was a severely hearing-impaired girl sitting in a church crying at the funeral of a classmate, because the verger was of the opinion that turning on the induction loop system would be of no purpose – and therefore refused to turn it on. The officiating pastor had a powerful, good voice, but not a single word reached the little girl, if it hadn’t been for her father sitting next to her, trying his very best to interpret into a very pidgin Norwegian sign language – while all the time raging in fury over the verger’s lack of understanding and his bad will.

I still speak loudly and clearly enough for all those with good hearing to hear me, even at the very rear of a relatively large church. But not all those sitting in church have good hearing, indeed a surprising number of them. I may, or may not, like it, but it is my responsibility that what I have to say comes through to them as well.

A great proportion of those hard of hearing within the parish are only slightly hearing impaired. The impairment does not bother them in their daily lives, other than causing them to ask people to repeat now and then, especially when several people are talking simultaneously. Normally they don’t use a hearing device, and they are to a great extent helped by loudspeakers, provided that these are professionally correctly installed and calibrated. Loudspeakers which are not properly installed or calibrated may make the situation worse than being without them altogether. But unless they sit in the front pews in the church (and how many do actually sit there voluntarily?), they will hardly hear a single word of what I say at the altar or at the pulpit, unless I use the microphone. This group of hard of hearing is very easily ignored, simply because, as they use no hearing devices, they are invisible.

As soon as the impairment is severe enough for a hearing device, their need becomes more apparent. Still, there are those who will be helped simply by the properly installed and calibrated loudspeakers, but for most hearing device users even the best loudspeakers are of little or no use. My powerful voice and my ability to speak clearly and distinctly will not be of any help at all. At best they may hear the vowels, but the consonants will not get through to them. They will need other means of assistance, and we are primarily talking of an induction loop system.[1] An induction loop is – in a somewhat simplified description – a small short range radio transmitter. The transmitter is installed inside the church or the parish house, and in the hearing device itself there is a receiver for the signals, converting them into sound that is adapted to the user’s hearing ability.

Unfortunately there still are a great number of churches and parish houses without an induction loop system, even in Europe, despite the EU regulation demanding universal accessibility even for those with a hearing impairment. Much too often the induction loop system is omitted to save money, despite the fact that a system complying with the requests for universal accessibility will hardly cost more than EUR 2000 – 3000.

We are, in other words, talking of a very low cost. An installed system is, however, of no help if nobody is using it. And the responsibility for turning on and using the system rest upon the pastor/preacher as well as upon the verger/janitor. An induction loop system that remains unused is no less than an abuse against any hard of hearing people attending an event and expecting to be included in it in the same way as those whose hearing is normal. If the system is not turned on, the pastor/preacher must ask for it to be switched on. How can they believe, if they cannot hear what is preached? – to rewrite slightly the words of St. Paul. And if a pastor/preacher claims he/she has no need for a microphone, the persons in charge of the event are simply not allowed to accept such an abuse against the hard of hearing in the audience.

And the system needs maintenance – regular and preventive maintenance. That a loudspeaker and induction loop system is out of order is not an acceptable excuse. If checked regularly, up to 90 % of all faults in such systems will be discovered and repaired before they may cause a shutdown of the system.

These days, when we speak about hard of hearing, we do not only mean elderly people attending services or meetings out of habit. What we previously used to call a seniority hearing impairment is nowadays a phenomenon found among people even as young as in their thirties. This is due to the generally increasing level of noise in a modern society – and especially to the sound level in music played by younger people in concerts as well as on those portable music devices with their ear plugs. We see this almost everywhere, on the street, on buses etc. The damage to hearing which previously only appeared after a long life of working are now becoming apparent even at the start of a professional career. These people are self-aware, gifted people knowing what they want and what they are entitled to. They are not grateful for “crumbs from the table” of hearing people. They demand the right to be included in any event whatsoever. There are also those who are hard of hearing from their birth, genetically or from other reasons, as well as those who become hearing impaired due to illness or injuries. Nowadays even they are much more self-aware than was the case only a few decades ago. Do we find them in our parishes? Or have they gone astray? What does it take to find them again, and to lead them back into the parish community? The one sheep is unfortunately not the only one, as it was pointed out at the 2014 International Conferance for Pastoral Care among Hard of Hearing in Kraków, Poland

Let us end back with St. Paul, writing to the Romans: “How, then, can they call on the one they have not believed in? And how can they believe in the one of whom they have not heard? And how can they hear without someone preaching to them?” (Rom 10,14) Maybe St. Paul ought rather to have written: “…how can they hear without someone preaching so that it is possible to hear what is said?” Oh yes, I most certainly need a microphone! I most certainly need loudspeakers as well as induction loops and, if I through this article can succeed in awaking the same consciousness in at least one fellow preacher, I may perhaps have done penance for at least some of all my abuses against my hard of hearing listeners during all those years when I claimed that I didn’t need one.

[1] There are other technologies as well, such as infrared or FM systems. Experience, however, shows that the traditional induction loop remains the most reliable, the most universal, the easiest to use as well as the easiest maintainable system. Those other technologies are much more supplier dependent, and they frequently have little or none compatibility between a system delivered from one hearing device supplier and those from others.